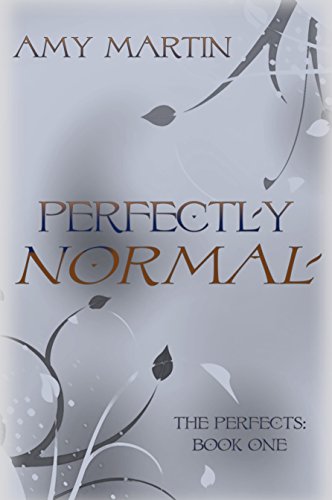 “I hadn’t expected to find myself in the throes of an existential crisis before noon, but I guess that’s just one of the hazards of inhabiting someone else’s body.”

After a friend mysteriously vanishes, wallflower Rachel Lord wakes up in the body of one of the ‘perfects’ at Ridgeview High School, Dani Maguire. Rachel’s got to figure out what happened to her, where her friend went, and how to fix it, all the while pretending to be someone she’s not; and time is running out.

Perfectly Normal kept me in a certain level of suspense. I read the first half of this book in a sitting; I had to know what in the world was going on. Truthfully, I forgot the summary of this novel when I opened it to read it. I didn’t go find it because I thought I’d surprise myself. Through the first half, I couldn’t decide if it would go in a science fiction route, a fantasy route, or a government conspiracy route – all seemed logical. I loved that it could have been anything. My lack of knowing thickened the mystery of it all.

I love the main character, Rachel. She’s a sassy wallflower who takes on her strange situation with sarcastic and grave humor. Everyone else in the story seemed a bit flat and stereotypical; there was the awesome, patient, and understanding male lead, the awesome, witty, chubby best friend, the overly dramatic squad of popular girls that made up the ‘perfects.’ However, given that, I still enjoyed this story. It touched on ‘the grass is greener’ type of thinking, which I expected from the get-go. Of course Rachel thinks that Dani’s life is perfect in every aspect, but when she walks – literally – a few miles in her shoes, she realized that Dani has problems, too, and that her hair doesn’t fix itself in the morning.

But high school drama wasn’t the point of the plot; it was a setting. The story is about our characters, Dani and Rachel, coming into adulthood, so to speak, while walking in someone else’s shoes and realizing what it takes to grow up: apologies, understanding, and the realization that our actions effect other people.

The majority of the novel is given through dialog, which isn’t a bad thing; I love dialog, however, there were a lot of times were I found myself skipping over dialog tags to get to the dialog I needed. A lot of the dialog gave me information about the plot second hand. I didn’t get to experience the thrill of the plot unfolding; I experienced the plot being told to me through dialog. The story slowed down too much for my liking, and I felt that the characters were just wasting my time; I needed to get to the ‘aha’ moment faster. I found myself skipping chunks of dialog or narration because I already knew or suspected the information I was being given.

This book has a very “Sabrina the Teenage Witch” vibe to it. It’s quirky, serious, and good-humored. Fan of the show will enjoy Perfectly Normal.

I gave Perfectly Normal a 4 out of 5 because 1) I read this book in two days, over the course of 2 sittings. I thought about it when I stopped reading. I wanted to know what happened and how. 2) It was fun. It showed that light side of high school drama without being overly dramatic and horrible. 3) I enjoyed it.

It was the little things that cost this book the last point, such as the older librarians use of the verb “trolling,” which to me is a very millennial thing to say, or how Ellie somehow fit a guitar case into a high school locker – those must be some massive lockers. I also felt that some of the scenes/dialog repeated information that I already knew, so I ended up skipped ahead a few times and skimming instead of reading.