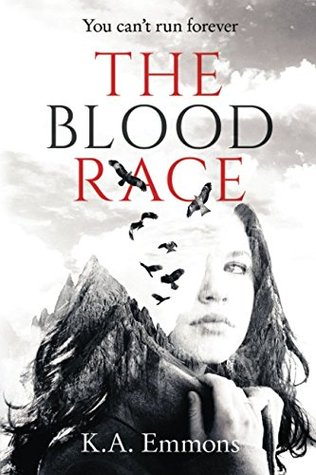 Born with unexplainable abilities he struggles to control, college student Ion tries desperately to integrate into his new school and finally put his dark past behind him. But after making a serious enemy, which leads to an accidental rendezvous with the mysterious old man next door— and his hauntingly beautiful but troubled young protégée Hawk, Ion realizes his life will never be normal again.

This book was good – not great, but good. It straddled the line between sci-fi and fantasy, but I don’t know if I liked it or not.

The plot – The plot of The Blood Race kept me reading. I wanted to know more. I wanted to know what was going to happen. Still, at the same time, I felt like not a lot actually happened. It lacked a sense of urgency.  There was a lot of “down time” where the characters filled the space with narration.

This book also used the “old man that knows everything” trope – Sensei knows everything about the future and the past, which I found annoying. I don’t like when plots are strung together based on “fate.” Now, this trope isn’t used poorly. It’s just used.

There were other times when I felt the plot was a bit forced into place without the story to back it up. I would also have liked to understand WTF is up with this world. It’s a dimension that exists outside of our reality – I think? The bricks of this world weren’t clear, like what powers the sliders have, what they are supposed to with these powers (other than chill out in the dimension and hon their skills). Sensei claims there is a darkness coming, but that’s never clarified or elaborated.

Now, I realize I complained a lot, but again – the plot wasn’t bad. I just wish Emmons would have elaborated on this very different world she’s built and how this fits into the rest of the world. This type of world isn’t a common one (at least not to me) and I have nothing in my reading experience to draw on to better understand what’s happening.

I would have liked to read more about the powers that these sliders have. The book centers more so on the characters and their inner struggles (with a lot of narration and metaphors.)

The characters – I didn’t get into Ion/Icarus. His character felt flat. A cookie cutter MC. His emotions never felt genuine.

At times I felt frustrated with Hawk, though I enjoyed her very human way of communication, like how she didn’t tell Icarus about the prophecy because she assumed someone else would, when in reality it made her uncomfortable.

Now, that being said, I liked Icarus and Hawk.

I wanted to throw things at Sensei, because he’s clearly hiding things and being deliberately vague.

The writing – As an indie book, the writing was above average. I prefer clear, fast-paced writing. Emmons wrote with a lot of metaphors. I mean, a lot of. Some conversations between Sensei and Hawk were so packed with philosophical metaphors that I felt like nothing of worth was being said. The narration was also like that. (Again, this is preference.)

MY BIGGEST BEEF with this book is that it doesn’t read like YA. It reads like NA or A – the main character is a college student, which makes him at least 18+, and it doesn’t have that “teenage” feel to it.

Overall – I’m giving The Blood Race a 4 out of 5, because despite it’s slow pace and narration-heavy writing, it was still a good read. I’m looking forward to finding out what happens in book 2.