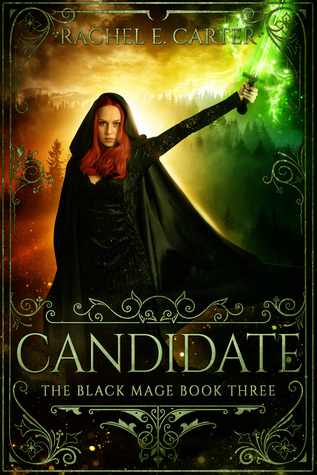 Twenty-year-old Ryiah is a black mage of Combat, but she’s not the Black Mage. Yet. She’s had her eyes on the legendary robe for as long as she can remember, and in just one year, she will have a chance at her country’s prestigious—and only—tourney for war mages… Too bad she is going up against a certain prince—the one person she has yet to beat.

The Candidacy finally arrives and a winner is robed, but something dark is lurking in her kingdom’s midst. Rival nations are closing in, and it’s time to make an alliance.

Unfortunately for Ryiah, that’s only the beginning. The worst enemy resides in the palace.

So, this is book three in The Black Mage series. If I hadn’t bought the boxed set, I don’t know if I would have made it this far into this series. The first two books were enjoyable, but they didn’t “wow” me. This book followed suite. It has the same problems as the first two: flat side characters and a lack of world building. But, this book did improve on the story aspect in that there was more going on outside of Ry’s immediate world. There’s a war brewing and rebels scheming.

This book gave insight into the lives of Darren and Blayne, and Blayne becomes more human than he has been shown in the past. I enjoyed their character development.

The book ends on a very bittersweet note, and I LOVE it. I love bittersweet endings. But, overall, Canidate gets a 4 out of 5. I enjoyed it, but not enough to stay up until dawn reading it.

This next paragraph contains major spoilers for this book.

You have been warned.

So, this whole time Ry’s been aiming to become the Black Mage, a title of prestige and power. Ry trains hard to become the best mage she can be, and it occupies her character for the better part of this book as well as in previous books. That has been her ultimate goal. And she loses the content. She does not become the Black Mage. I liked that she lost. Carter doesn’t pull the typical YA thing and have Ry just become the best. No. She’s not the best, and that realization is hard for Ry to swallow. Rejection isn’t fun.

Also, the last third of this book – essentially everything after the contest – sped up. Derrick – Ry’s brother – had joined the rebels and brings doubt onto what she thought she knew. He dies, and it tears Ry apart. But, it’s not just his death. It’s his betrayal. His betrayal sparks Ry’s realization that everything is not as it seems.

I really liked the set-up for Blayne as the villain. We’re initially led to see him as a bad guy, but then he’s kind of an okay guy, and he’s given human vulnerability. And then he’s a sociopath bent on blood and war and power.

I did not like the characterization of King Lucius. He’s sooooo cookie cutter that it hurts. He’s a typical evil tyrant who threatens literally everyone around him. How has this guy stayed in power this long? How has there not bee a coup against him? He is a terrible, horrible person. He treats Ryiah like poop even though she could literally kill him AT ANY TIME with magic. So many mages could do the same, yet no one has. His people are suffering, yet no one does anything. It just didn’t feel well-written to me. Just because this is YA doesn’t mean the villains can’t have rich backstories.

But, that’s just me.