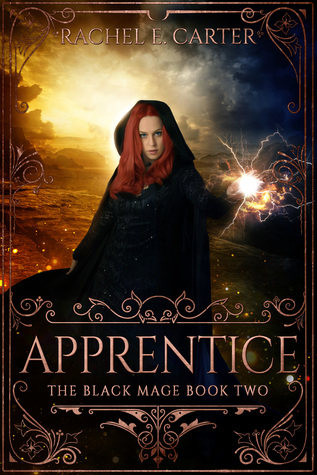 She survived a trial year at the Academy of Magic, but that was the easy part…

Now sixteen-year-old Ryiah is an apprentice of Combat, her school’s most notorious faction. When she finishes, she will be a war mage, but in order to do so, she has to survive four years traveling across Jerar, training with a master she hates, her old nemesis, Priscilla, and Prince Darren, her sometimes-rival sometimes… more?

Ry’s new apprenticeship is nothing like what she prepared for. War is on the horizon and her lessons aren’t just for practice anymore.

I read the first book in this series in two sittings. It was an incredibility quick read and mostly enjoyable. While I enjoyed the second book, it seemed to just go on and on. This book spans four years – the four years spent as an apprentice, so when this book ends, Ryiah is 20 years old. Yet she still acts like the 16 year old she is at the start. Her personality doesn’t mature.

This series is also pulling the “unstoppable romance” thing with Ryiah and Darren, where he’s not a nice guy and she just can’t get over him. It’s setting a bad example for preteen girls. It’s teaching them to think the mean guys who treat them poorly really secretly love them.

IMPORTANT – girls, if a guy treats you like poop, he doesn’t love you. Get out of that relationship.

I just…I don’t know what it is about this series that just doesn’t settle with me. It’s a lack of world building, the flat side character, but it’s also something within the writing itself – the structure of the way Carter gives the reader information. It lacks solidity. It doesn’t have a solid ground underneath it. I’m getting a lot of inner dialog but nothing else. The writing glosses over little things that should have been narrated, like little actions here and there. I’m not fully invested or connected with the story. I haven’t been able to forget that I’m reading a story. It’s not immersive enough.

That doesn’t mean I haven’t enjoyed the story. I’ve still giving Apprentice 4 out of 5.